The "Way of the Cross" Old Main Commemorative Window

Jake Krier has served as the Manager of Alumni Relations and The Bethany Fund at Bethany Lutheran College in Mankato, Minnesota, since 2010. He's a proud 2006 graduate of Bethany with a Bachelor’s degree in Business Administration. Jake and his wife Gretta have two children. 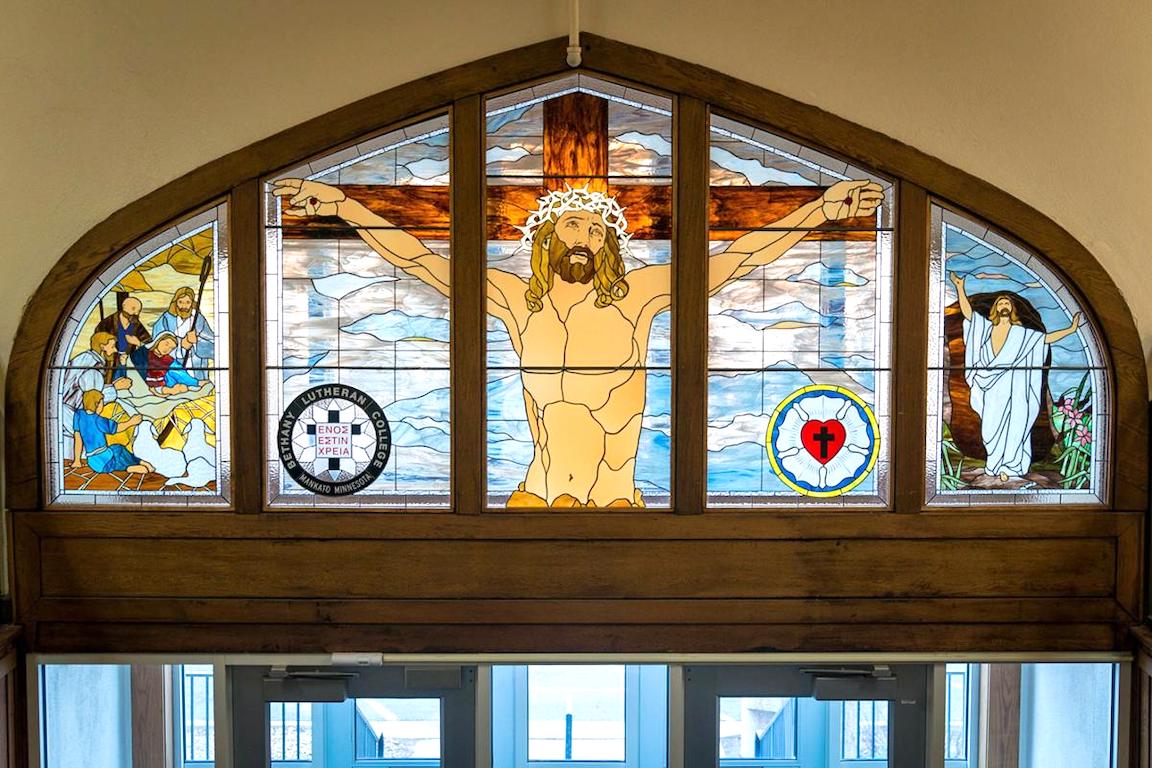 "The Way of the Cross" stained glass window was installed at the entrance of Bethany's Old Main building on Thursday, March 13, 2015. The Bethany High School classes of 1952 and 1953 donated funds to create and install this precious piece to campus. It is titled "The Way of the Cross" because it depicts the life of Christ in the artwork with his birth, death on the cross, and resurrection. The classes wanted to donate the window in honor of their Bethany education, and to serve as a reminder to all the students, faculty, and staff that the College's mission of the "One Thing Needful," which is the saving Gospel of Christ, is at the heart and center of a Bethany education.

The story of how the window came to be...

The creation and donation of the window began with an idea in 2012 when the high school class of 1952 was holding its 60th reunion during Bethany's Fall Festival – A Homecoming Weekend. Alumni Harold Burgdorf and Harold Theiste from the Class of 1952 told me their classmates were interested in donating funding to provide something to the campus and sought ideas.

Joining with Daniel Mundahl, Vice President for Finance and Administration, we set about the task of coming up with ideas by walking around the campus in an attempt to identify needs. We discovered several possible projects, such as landscaping or outdoor features, but after walking past the Jesus-Mary-Martha stained glass window (Luke 10:38-42) in Old Main,

Window location in Old Main – What Krier and Mundahl saw
and then looking at the entrance directly across from that window, an idea for another stained glass window depicting the life of Christ was born. On three of the panes of glass above the entrance, the artwork would express the birth, death on the cross, resurrection of Christ, and how all Christians are saved by that work of our Lord. I then brought the idea of the stained glass window to Burgdorf and Theiste, they reached out to their classmates, and they decided to begin making this window a reality.

I knew Bob Vogel of Stained Glass Studios in St. Peter, Minnesota, reported the idea for the window to him, and discussed the details of the project. Vogel needed an artistic design to serve as a template for the stained glass window, and he connected the team with his son, Alex Vogel, a talented artist from Colorado. Alex developed a design and we showed it to Burgdorf and Theiste. The depiction of the birth, death, and resurrection was excellent, but before production would begin, the team sought the approval of the Evangelical Lutheran Synod, the church body that owns and operates Bethany. 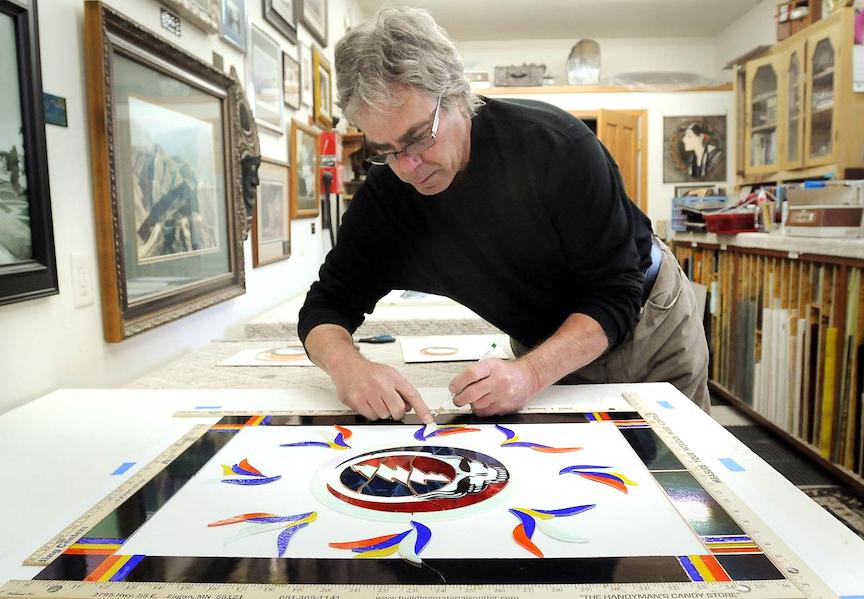 Bob Vogel working in his studio

The cost for the design, creation and installation of the window would be roughly $10,000. The Class of 1952 felt they needed another partner to help make the window a reality, and Theiste had been sharing the idea for the project with members of the Bethany High School Class of 1953. Many he spoke with showed a strong interest in being a part of the project, and after a presentation showing the design to the Class of 1953 at their 60th reunion in September 2013, they unanimously agreed to help make this window a reality. It took more than three years to organize both classes and raise the funds needed to create and install the window. 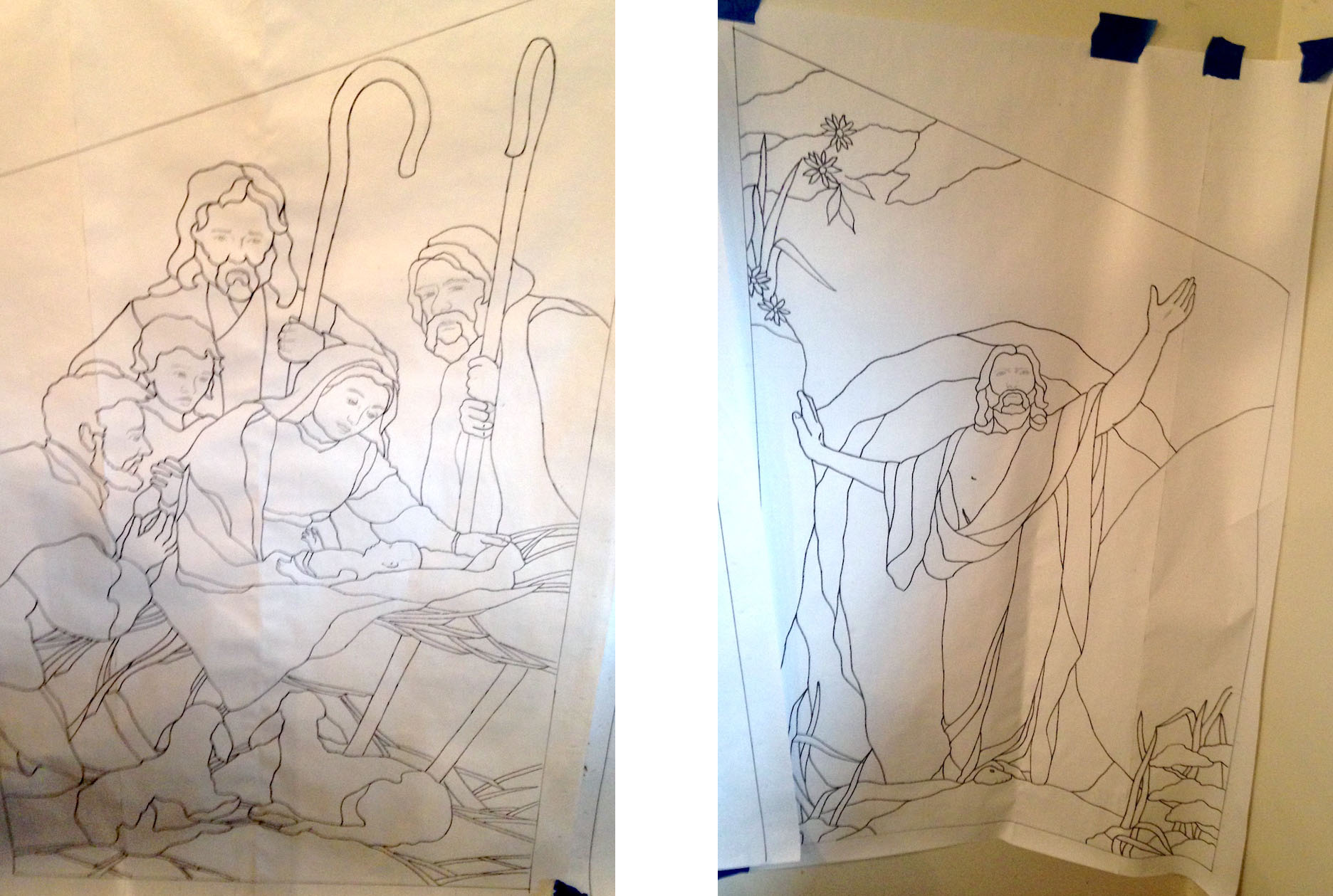 left side and right side "cartoons" 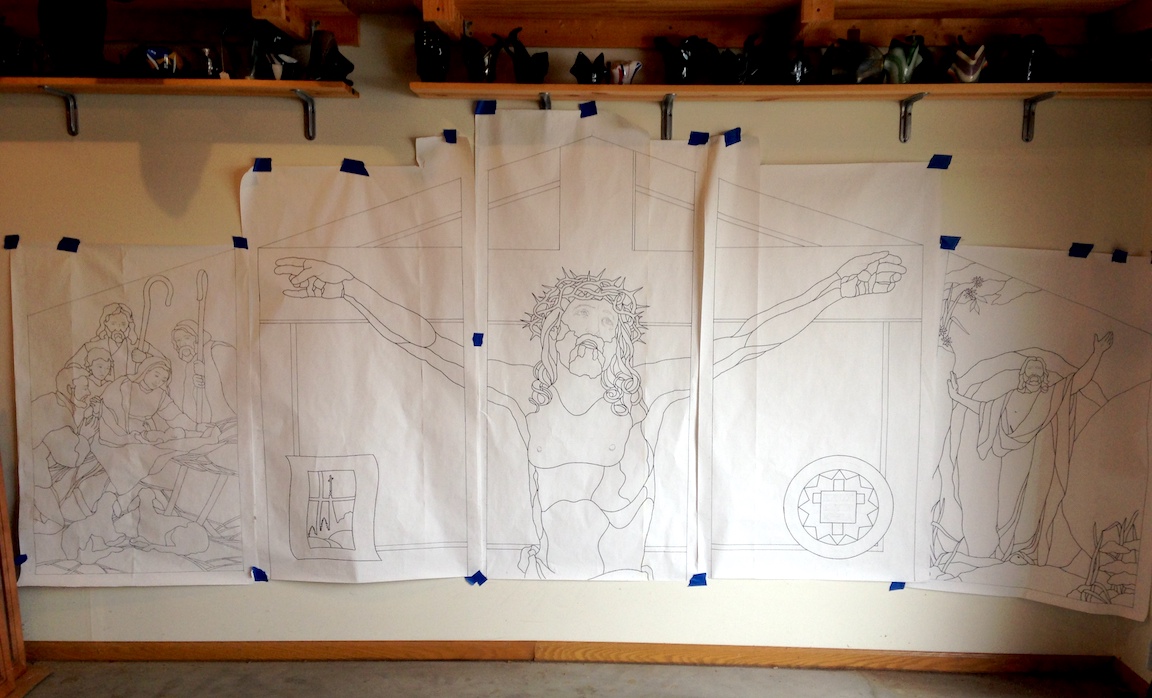 Once the funds were raised, artist Alex Vogel enlarged his design to the full 12 by 5 feet actual size of the window and then sent it to his father Bob in St. Peter. After reviewing the design, Bob Vogel determined it would take thirteen pieces of glass to create the window. He obtained the special glass from a company in Lansing, Michigan. The glass was sent to Alex in Colorado where he painted it and drew the faces. He then sent the finished product back to Stained Glass Studios in St. Peter where Bob cut and cooked the glass into the final pieces. It took about six months to prepare the glass and another week to install it at Bethany. Mark Hall, a friend and installer of large glass from Kasota, Minnesota, helped to ensure the final product was completed properly. 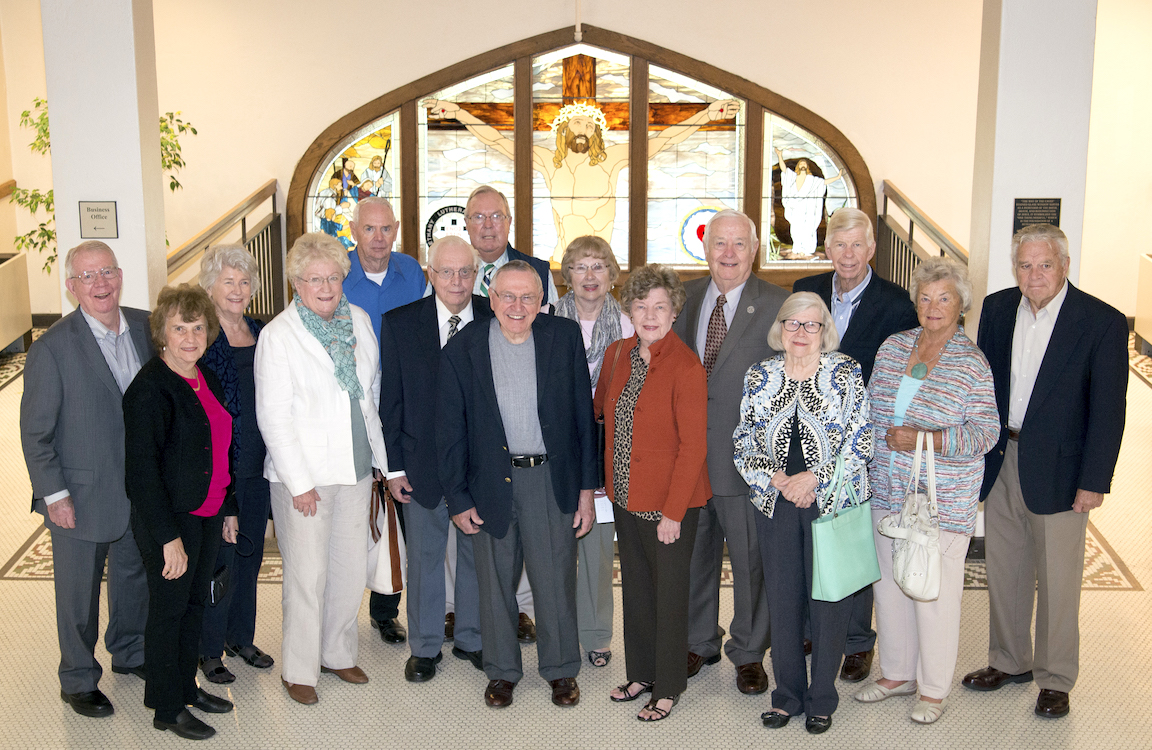 The window was formally dedicated to the glory of God on September 20, 2015, after the Sunday worship service during Bethany's Fall Festival weekend. All members from the Classes of 1952 and 1953 were invited back to participate in the dedication and celebrate making their gift a reality, and many came. The dedication ceremony was officiated by Bethany Chaplain Don Moldstad, and a brunch was held afterwards. Speakers there were Bethany President Gene Pfeifer, Harold Burgdorf and I.

Translate this page into your language
Return to original language with "show original" button at top left.

-
Tom Kuster (The Christ in Media Institute) 2021-10-24 3:23:45am
Thanks for your work, Jake, and to the classes for not only beautifying but inspiring the Bethany campus. I'm asking you – and anyone else reading this: look around. Are there any other spaces near you that could use a Christian message in stained glass?
-
Jake Krier (Bethany Lutheran College ) 2021-11-04 1:13:40pm
Hi Tom, thank you for putting on a wonderful conference! That is a good question. That I am aware of, no specific area on-campus has been identified as a place where another stained glass window should go. One place that comes to mind is the Trinity Chapel entry area windows, or the windows in the narthex looking out into the woods and President's Hall. We would always be open to ideas, and looking into the possibility of adding another stained glass window to campus. Thank you!
-
Tom Kuster (Christ in Media Institute) 2021-10-31 1:30:31am
One wishes information like the above were available for every beautiful stained glass window. The most venerable window on the Bethany Lutheran College campus is the "Jesus-Mary-Martha Window" that stands above the Old Main lobby and greets anyone who enters the hillside doors under the "Way of the Cross" window described here. This window is familiar to – and I venture to say beloved by every Bethany student since the beginning of the school. But when I asked the Bethany archivist, Dr. Erling Teigen, to search the records for information about its origin, he replied: "No information has been found concerning the history of the Mary Martha stained glass window in the lobby of the main building. However, a picture of it appears in the 1917 Echo, a publication that served the Ladies’ college as newspaper, literary magazine and annual with pictures of faculty and graduates."
-
Jake Krier (Bethany Lutheran College ) 2021-11-04 1:24:06pm
Yes, there is not much information on how that window came to be during the Bethany Ladies College days. If you are standing below the stairs and looking up at the Mary Martha Window, there is a plaque on the left pillar. That was put there by the Class of '52 and '53 that made the Way of the Cross window a reality. They put up a plaque at the dedication to explain how there window came to be, then noticed there wasn't one for the Mary Martha window, and donated funds to put up a plaque for that window as well. They wanted to make sure both window were consistent and had something that could be up explaining the meaning of both windows.
-
Isaiah Johnson (Martin Luther College) 2021-11-01 7:44:24pm
Mr. Krier,


Thank you for this great informative piece. Stain glass is one of the best forms of symbolism seen in the church today which is often overlooked. Many times, churches stained glass tells a story, with it often being the story of Jesus. With the classes coming together and putting a storied piece on the window at the entrance to the old main building, it helps serve as a reminder of what Jesus did for us. Stain glass is very expensive, as your post shows it was around $10,000 for this piece.

After reading the article, I was wondering if you knew why this specific design was chosen? I understand what the glass portrays, but is there a special significance that made this piece stand out compared to others? Other designs I often see are pieces that portray Lutheran symbolism. For example, a chi-rho, a Lutheran seal, a dove, a lion, a lamb, etc.

Thank you for your time in sharing this amazing project with us! It is definitely a staple at the college that will have a lasting impact.

-
Jake Krier (Bethany Lutheran College ) 2021-11-04 2:02:39pm
Hi Isaiah, thank you for participating in the conference and I appreciate your comments! There is a Lutheran seal in the window and also lambs in the birth part of the window. I know that the classes wanted to make sure the Lutheran seal and the Bethany seal (that expresses the "One Thing Needful" in latin) were a part of the window. I can't recall anything else with the window that has special significance besides that and of course the life of Christ/meaning. Unfortunately, the artist who designed this window has passed away, so I was unable get his perspective for this presentation.
-
Anna Busch (Martin Luther College) 2021-11-04 3:19:31am
Jake Krier,

I have only been on the Bethany campus for a few minutes and did not get to see this stained glass window. I think it will be worth my time to head to Mankato to see this piece of art. I think it is easy to go about day-to-day events and forget about our Savior’s amazing life, death, and resurrection, but this window right at the entrance to Old Main makes for a great reminder. You mentioned walking around campus looking for needs, and I think you made a great choice, including this amazing reminder of our salvation on the campus. Thank you for your presentation, giving a little history behind what I’m assuming is a very popular topic for visitors on campus.

After reading through your presentation of this stained glass window, I had a couple of questions that came to mind. Considering that Bethany is a decently sized campus, with I’m assuming many needs, was there any pushback from the donors for using their money to pay for this artwork? There is no doubt that this stained glass window is an important addition to the campus, but sometimes materialistic needs take priority in our minds. As I mentioned, I have not spent much time on the campus, but are there any plans to add more of this biblical artwork to any other windows? Although it is a bit pricey, I can see how the constant spiritual reminders are very beneficial to the students and faculty.

Thanks again for sharing some recent history of Bethany. I hope more alumni classes will be willing to donate money towards significant changes like this one—God’s blessings.

-
Jake C Krier (Bethany Lutheran College ) 2021-11-04 2:11:09pm
Hi Anna, Thank you for participating, and your compliments! You are always welcome at Bethany. So please come back to see the window. No, there was never any push-back. Everyone in the class had the option to donate to the window. Currently, there are no plans that I am aware of to add another stained glass window to campus, but my door is always open to discuss. Again, thank you for participating and for saying such kind things about this window and Bethany!